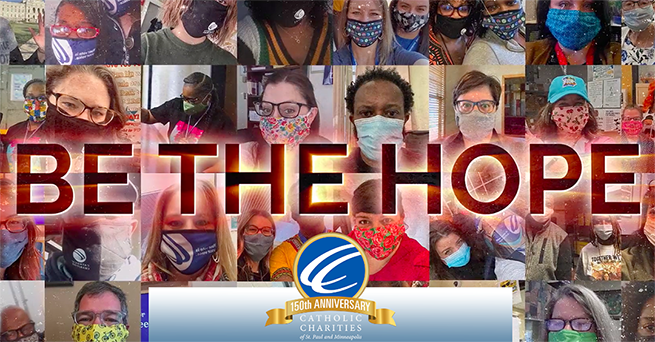 What does hope look like? What does it sound like, act like, and feel like? That's the question at the heart of Catholic Charities of St. Paul and Minneapolis's Hope in Action – and the answer is always "us."

The December 2020 digital campaign was the nonprofit organization's solution for reaching donors, service members, and the philanthropic spirit of the Twin Cities during the COVID-19 pandemic. Here's why it was needed, how it was made, and what Catholic Charities learned about connecting with its audience.

Guided by the Spirit of Hope

The way Catholic Charities articulates its mission makes it sound simple: "serve those most in need." While its most visible efforts address those without homes and jobs, the ways it does that are more nuanced, focusing on the many inequalities of modern society, from poverty and unemployment to civil rights, social activism, and racial injustice.

Like other nonprofits, Catholic Charities exists largely because of funding from private individuals and organizations that share its vision – but to its leaders, it's about more than donations. "We don't want them to just send us money," says Gina Licari, Senior Public Engagement and Marketing Manager with Catholic Charities. "We want them to care, and hope, and understand why these issues exist today."

The ongoing pandemic, increasing wealth gaps, and systemic injustice that dominate headlines locally and around the world – "They feel so big and overwhelming," Gina notes, "people felt there wasn't anything they could do. We wanted to democratize hope – to make it more accessible."

"[Catholic Charities is] an advocate for justice in our community," adds Amanda Horner, Senior Communications Manager. "2020 shone a bright light on injustice, and it's part of our DNA to examine those challenges, recognize their weight and build a feeling of hope and togetherness to address them."

The Saint Nicholas Dinner is a Catholic Charities gala that gathers hundreds of sponsors, donors, community members, and volunteers every holiday season. More than 1,000 attendees fill the room from Minneapolis and St. Paul (including the mayors of both cities), bringing them together for an evening of camaraderie, reflection, and fundraising philanthropy emceed by Twin Cities actor T. Mychael Rambo. Both Gina and Amanda describe the event as a "homecoming", with attendees looking forward to both familiar faces together and new friends. 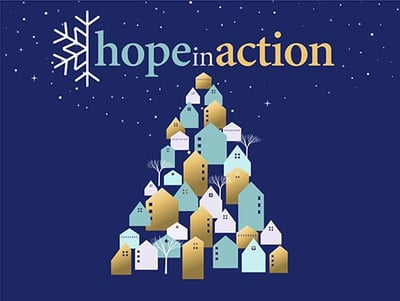 But with in-person events nixed across the board in 2020, Catholic Charities needed a brand-new, self-contained digital piece that would stand out, stand alone, and showcase the impact the organization made in 2020 in its four main service areas (housing, families and children, aging and disability, and community vitality).

But it wasn't enough to go digital. "We didn't want this to be a Zoom event," Amanda says. "We knew that if our audience wasn't already sick of [virtual meetings], they would be soon. We knew we had to build a new format."

More than an alternative or replacement for the annual event, Hope in Action was a new initiative with a new intent: show audiences that the solution to society's problems – hope itself – is inside each one of us. Then make it as easy to share as it is to watch.

Focusing on Calls to Action

To amplify the many voices that comprise Catholic Charities' mission, as well as the communities it serves, StoryTeller crafted the 30-minute video presentation in the format of a television special, including discrete segments focusing on the power of individuals to make change – while always giving viewers a way to take action.

"We wanted to show all the ways people can bring hope," Amanda says. StoryTeller and Catholic Charities knew that if Hope in Action was going to be more than a video, the call-to-action had to be more than "donate." "We had to show them the ways to stay connected, no matter what their resources and means are."

Calls to donate, volunteer, and share social media posts litter the entire half-hour program. Gina says these "connect the feeling of hope, which is the bedrock of Hope in Action, to something you can do right now."

"We had to tell them, 'No matter what action you're taking, you're bringing hope to your community,'" Amanda says.

Hope in Action was "able to engage with a much broader audience than we would have normally," Amanda says – partly because part of the audience was actually on screen. Using archival footage of 2020's work, newly shot interview segments with leadership, and personal self-shot video from volunteers gave Hope in Action a bit of the "homecoming" vibe the Saint Nicholas Dinner is known for.

Gina says the team had "a very extensive list of people and types of voices" represented in Hope in Action. "Volunteers, leadership, elected officials – faces who could be representative of all the people who support Catholic Charities. We used pretty much whatever we got.

"And when they saw themselves in the actual event" – which can be difficult to arrange in a live setting – "volunteers, staff, and stakeholders felt compelled to share the video with their network."

A Learning Opportunity with Significant ROI

The effort and ingenuity paid off for Catholic Charities. "ROI was huge," Gina says, with donations on par with proceeds from previous in-person dinners. "We had our largest December ever."

With the video finished in time for the holidays, the team capitalized on "an entire month of engagement opportunities" by creating a Hope in Action minisite, focused emails, and a social media content series – a multichannel campaign Amanda says was rewarded with spikes in web traffic and email open rates. "The key was presenting lots of opportunities for people to take action," Gina says.

"We wouldn't have been able to do this if we didn't have the long-standing partnership with StoryTeller," Gina adds. "Not just the execution or use of existing assets, but the familiarity with our message and mission were essential to pulling it off."

"We've been around for 150 years," Amanda says. "[COVID-19] wasn't the first pandemic we've been through, and we've always evolved in response to the needs of the community. Those needs in 2020 were very clear. To feature [staff and volunteers] let us focus Hope in Action toward more personal stories" – ones that align with Catholic Charities' century-and-a-half long mission while focusing on the future.

2020 changed the landscape for nonprofit fundraising – maybe forever – and you can't rely on traditional tactics to reach your audience anymore. Find out how creative outreach like video can generate the engagement and emotion you need to meet your fundraising goals.

How to Send a Press Release in the Digital Age

The press release is still a viable communications tool for organizations hoping to disseminate...

Top Video Challenges: Why You Need to Hire a Video Production Agency

I have a little secret for you—video is the most effective form of content marketing today. Video...

Congratulations! The boss says you’ve got the green light to begin producing video as part of your...