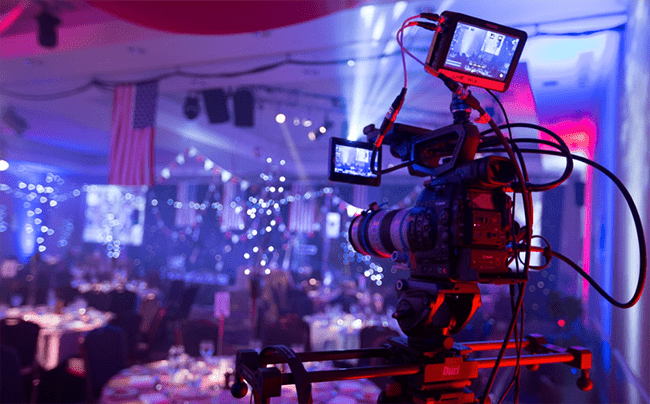 Planning your organization's end of year event is really a year-round responsibility. Once one event ends, the next one begins — at least in the organizer's mind. What went well this time? What successes and initiatives should be included in the next one? How can you top what you just did? The planning is nonstop. Even more, if you include a video in your big event.

1. Creative recap of the year's successes

This is the most obvious kind of video, but it's all about the storytelling. People love to hear the year's success stories (and you'll feel good telling them), but make it entertaining. Don't just have somebody read a script and cover the words with appropriate pictures. That's like going over to your neighbor's house to watch a slideshow from their last trip — there's a reason nobody does that anymore.

Instead, interview some of the key players from your big success stories (not just the organization's leaders). Ask them about their accomplishments, their proudest moments. Bring the story to life with supporting video that "takes us there" — then add music, graphics, and anything else that might increase the interest and entertainment of your audience.

There's a reason many organizations go with a great feature story illustrating one key success. It works. For charities and companies. If you have a compelling character who is willing to share how the organization helped them, and maybe even how they want to thank the people at the event, you've already got an interesting message. As one of my colleagues at WCCO-TV used to say, "that story just tells itself."

Don't get me wrong, it takes some work to identify the good story, and then some great storytelling to make sure it comes across correctly, but there's a reason some people refer  these interesting, engaging human interest stories as "make 'em cry" videos. If you pick the right one, there really will be tears in the audience.

Here's one of my favorites. The video below features a resident from a Twin Cities nonprofit that opened a new building to transition people from homelessness. Instead of showing the building process or the CEO, this video features the real story of someone who's life completely changed by having a place to live.

Want to honor a key member of your team or a key donor to the charity? Nothing calls them out more than a nice video. If the focal point of the event will be an introduction and big speech by someone important, consider adding video to the mix. A well-produced video about the person will set the stage much better than a lengthy introduction (a.k.a. somebody stumbling over their bio), and the video will even make their speech better because the audience can better understand and visualize some of the things they are likely to talk about.

Read that sentence again for a moment. It says leaders (plural), not just one leader. In other words, I'm not talking about one person reading a one-minute script. No matter how compelling the copy, that won't get anybody's attention. I'm talking about a group of people, reading small parts of the script into the camera individually — edited into one message.

It's an interesting, compelling way to show off your team, highlight some of the things that they do (by paying careful attention to backgrounds), and gives the feeling that the collective group is thankful for the support.

This requires some production savvy and some editing chops, but the end product can be a lot of fun — not to mention some of the shoots themselves. Pick a song that's familiar (so people already know the words) and on-message (so it doesn't distract from the event), and you're likely to get a big reaction.

There's nothing quite like seeing the CEO let loose on an 80s rock song or some of the support staff dancing to disco to get the crowd going. But beware, syncing the video is a lot of work. Be prepared for a big project.

6. Employees sing a song (or read a poem) line-by-line

If you're looking for a big reaction, get people to sing or read an old song. Whether they sing a Christmas carol line-by-line or read a poem like The Night Before Christmas, their character will come out. Your biggest hams will play to the camera and get big laughs. Your shyest staffers will also play well — as long as you can convince them to go on camera. This is our favorite, fun, inclusive kind of video for an end-of-year event, and it really is a guaranteed show-stopper.

Whether you are creating your video internally or working with a video production company to help you, it's important to take some time to brainstorm different ideas that could work best for your event. Your video might be funny, it could be a tear-filled  or a celebration of big milestones, but no matter what, it needs to be well-planned. Here are some more video examples to help inspire you.

4 Types of Effective Safety Training Videos for Your Employees

Safety training videos are about so much more than checking a box to fulfill compliance. Many of...

Video for Sales: 7 Effective Ways to Close the Deal

When it comes to business, the only thing that ultimately matters is whether or not you can close...