When the COVID-19 pandemic wiped Minneapolis-St. Paul Business Journal's event slate clean, organizers looked for ways to maintain their robust schedule. On a growing list of virtual events where in-person ones had been, their 23rd annual Women in Business Awards loomed.

"We had to figure out a way to highlight these incredible women honorees while making sponsors feel they were getting the same valuable exposure," says Pamela Brueck, Audience Development Director with MSPBJ. The Women in Business Awards is also MSPBJ's largest and most-attended event, peaking with over 900 in-person attendees in 2019. Sponsors and exhibitors were already committed to making the 2020 event happen, but what it would look like was anyone's guess.

When we were asked to take a whole new vision from concept to execution – one that could be experienced totally virtually – we tapped into our television broadcasting roots to develop a unique solution. 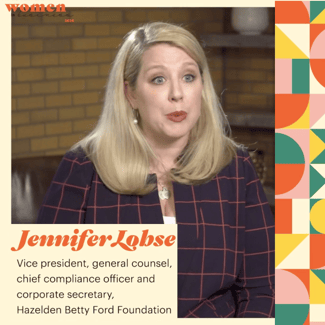 Prior to 2020, the Women in Business Awards was a traditional in-person event: networking time with cocktails and hors d'oeuvres amid a business expo highlighting area businesswomen. The evening program features more than 50 women who are acknowledged individually and welcomed to receive their award onstage followed by a photo op. In a live event, with the audience captive, this is an efficient way to recognize all recipients equally – but in a digital event, it'd require keeping the viewer’s attention through a 90-minute video presentation. Since viewers could stop watching at any point or after their colleague is acknowledged, MSPBJ needed something more directly engaging to keep audiences tuned in.

Pam and StoryTeller decided to go another direction. Leveraging its team of seasoned television broadcasters, StoryTeller and MSPBJ decided to focus on the women making waves in the Twin Cities business scene in a snappy, engaging video event with topical, TV-like segments.

Each segment of the event focused on a point in one’s professional career: that first big break,  a significant mentor, or finding their voice as a leader. Participants were also asked to share their advice for the next generation of women business leaders.

Without real-world restrictions, the event gave each honoree a platform they never would've had at an in-person event. "It made sense, because that's one of the unique things you can do with a virtual event," Pam said. "You can incorporate all the honorees. They can share their professional identity, important parts of their career journey, and advice they'd learned." In other words, with a virtual event, we could focus on the reasons they were being honored in the first place.

With the idea solidified – produce a virtual event to recognize honorees, engage audiences, and boost sponsors – StoryTeller's experienced crew went to work interviewing honorees in a COVID safe setting and producing a show intended to keep the attention of all viewers through the entire presentation. All told, ten individual stories were produced featuring valuable insight from honorees, edited to smoothly transition between stories, features and sponsor messages.

Pam said the event achieved MSPBJ's primary goals: attendance, sponsorship, and recognition. The 2020 Women in Business Awards attracted approximately 500 remote "attendees"; she says MSPBJ "didn't lose a single sponsor on this event"; and the women featured were "super impressed" with the product of their input.

For Pam, the experience also revealed the value of video and its ability to reinforce storytelling in their events. "It's going to be hard going back," she said. "I would like to incorporate a lot more video into our events," even when live events are back on the table, "because it let us highlight key people, polish the message, and control the timing.

"We're a content producer," Pam added of MSPBJ's core mission. "It makes sense that we'd leverage video to tell stories where people can actually learn something. It makes each story more meaningful."

When you come from a television news background, it's easy to get jaded. Sure, I was known for...

How to Make Training Videos That Employees Want to Watch

The corporate training video. It just sounds painfully boring, doesn’t it? And let’s be honest, if...

When Does It Make Sense to Outsource Content Marketing?

How long does it typically take you to write a 500-word blog post for your company?  If your answer...