You’ve brainstormed, planned, and found the budget, but are you ready to actually put together that marketing video? If you don’t have a written script you're likely setting yourself up for failure.

It may sound funny for a company that prides itself on “unscripted” content to recommend a video script template, but the script is your roadmap to success. Producing a video without one is like baking without a recipe -- it might taste fine, but there are no guarantees. In fact, we consider scripts essential to the production process.

Why? Because a video script isn't just about nailing your key messages. It's also the template for your video production, the building blocks for the project, and a crucial piece of communication from the producer to the video editor and graphic designer. It’s so important that we’re willing to share our video script template to make sure that you’re on the right track. 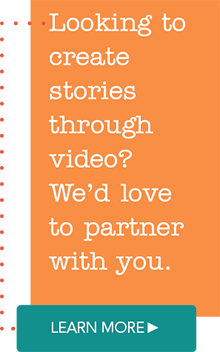 What is a Video Script?

A video script is an overview document that summarizes all of the relevant information needed for a video shoot or production. While the document may vary slightly depending on the specifics of the project, a video script will often include information such as locations, camera shots, action, dialogue, music, and graphics.

Whether you write the words for an announcer, gather remarks in sound bites, prepare a script for actors, match graphics with music or natural sound, or combine a few of those techniques, the script is the roadmap for your video production.

How to Create a Video Script

Much like the script for a play, with the dialogue and stage directions laid out side-by-side, video scripts are laid out in three columns, showing the video, audio, and corresponding graphics. Of course, you may have another preferred approach to scripting, the important part is that you have a tool that can be used in a similar manner.

For example, this short script for a StoryTeller video blog shows everything that will happen in the video from the opening animation to the final graphic. (Click image to download.)

Every word and every shot is carefully lined up so the editor can turn the words on the script, whether written or spoken, into the video you see below:

Why Do I Need a Video Script?

If you use a video script template correctly, you will see value during every phase of production. Because it helps you visualize the finished product, it will help you see any issues or concerns long before they are ever edited, and in many cases, even shot.

Pro Tip: Although the script is a valuable tool to bring together all three columns in your production — video, audio, and graphics — it can also be a tool to analyze how well each of those will work on their own. Read down the "audio" column to see whether your messaging works for somebody who's not paying attention to the video, the "video" column for somebody who doesn't hear the audio on social media and the "graphics" column to make sure you're identifying everything properly.

Bonus: How Do We Use Scripts for "Unscripted Videos"?

In the beginning of this article, I mentioned that at StoryTeller we specialize in "unscripted videos." By their name alone, one would assume we can't use scripts - so how do scripts apply?

Unscripted videos aren't planned word-for-word. The producer begins with an understanding of the key messages that need to be communicated and the characters who best communicate that information. The producer will write a list of questions to steer the conversation to ensure the interview subject delivers the desired responses. The response is then in the words of the interview subject, not a "canned" response. Once again, the right script will help the video stay on-topic and save time for the shoot.

Using a video script template works for long videos as well as short ones, it works for documentaries and music videos, and we used a similar format for news stories when I was at WCCO-TV, our local Minneapolis news station. If you're working on a video project and don't have your own video script template, download ours. I guarantee it will help you organize the project and improve communication with all stakeholders.

Editor's Note: This blog originally published in 2016 and was updated in 2022.

17 Essential Video Production Questions to Ask Before Creating a Video

We spend a lot of time sitting down with clients discussing how we can tell their best stories...

Can you imagine inviting friends over for a nice dinner at your house and not offering dessert? The...

We’ve been beating the video drum since we started as a marketing agency. We know firsthand that ...