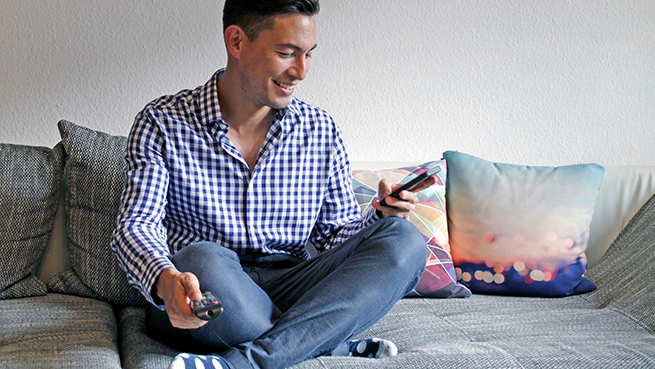 It's the era of binge-watching, and almost everyone is guilty of getting sucked into episode after episode... after episode. Heck, some on-demand viewing platforms even start playing the next episode for you! Primetime shows are losing real-time viewership to the far more convenient on-demand viewing options out there today. Netflix, Hulu, Google Play and Amazon Prime all stream through almost every device you can imagine. And with 100 million hours of video watched on Facebook every day, it's not surprising that Facebook and its billion users are ready for the next phase.

While you probably come across dozens of videos on your Facebook News Feed each day – especially ads and shared content – you might not have noticed that there's a tab on the upper lefthand side of your Facebook homepage that reads "Watch."

“Video will be a much bigger driver of what we’ll do over the next 2-3 years than Messenger and WhatsApp.”

- Mark Zuckerberg predicted in July of 2017

Long story short, video has flooded the News Feed. It has become so increasingly successful and engaging that the cutting-edge team at Facebook decided to create a designated place for users to watch videos. Thus, Facebook Watch was born, allowing users to easily locate, binge and bookmark the shows they love. It started with a soft launch to a limited group of users in August. 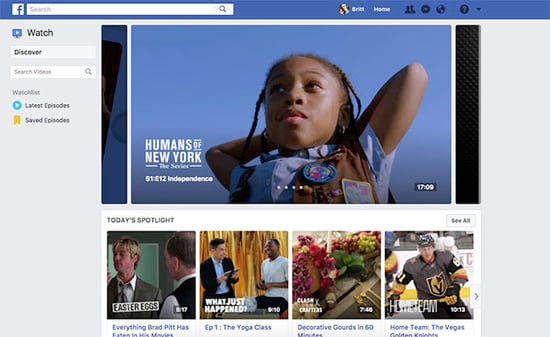 Facebook realizes that they have an already captive audience and they have plans to spend a billion dollars in 2017 and 2018 to create original content that will appear on this new content network.

Watch is designed for mobile, laptop, and TV apps and is comprised of episodes — live or recorded. There's also a Watchlist so you never miss out on the latest episodes to complete your binge.

"Watch represents Facebook's push into the market of professional, episodic video, a move that pits the social network against more established players in the space like Netflix and YouTube."

I like to think of it as a combination of Netflix and Youtube, actually. You can personalize your account and discover shows, while also being able to engage with videos by leaving comments. The best part about the personalization of this tool is that it makes recommendations based on your interests (just like Netflix and YouTube), opening the door to discovering new shows, organized around what your Facebook friends and communities are watching.

Facebook has already started partnering up with some notable content creators. Here's a rundown of some of their original shows, that was originally curated by TechCrunch:

How Do I Get on My Videos on Facebook Watch?

Before you hop onto Watch and begin bookmarking some videos for your own enjoyment, remember that it's a great tool for more than just personal use. Though Watch is home to some professionally produced videos, it isn't primetime television. It's a platform for anyone to find an audience, build a fanbase and earn money for their work. This is anyone's chance to shine!

"Anybody is going to be able to create shows for Watch, as long as they meet our community guidelines.”

For this, let's turn to the "Queen of Facebook," Mari Smith. I was fortunate to sit-in on one of her presentations recently at HubSpot's Inbound 2017 conference in Boston, where she talked about the ways Facebook is transforming video. Though Facebook Watch had only been introduced a few weeks prior to the Boston conference, Smith already had some tips for getting your video onto Watch. According to her, the best ways to get on Watch include:

Not to worry, the Watch tab will not eliminate your beloved news feed videos. In fact, Facebook Live is becoming an even greater tool for businesses of all sizes. Smith placed a strong emphasis on the importance of Facebook Live during her sessions at the conference this year, as well — sharing some eye-catching statistics.

Facebook Live is tried and true — it will improve your Facebook reach, it's incredibly user-friendly and it's FREE. It gives people an inside look at your business, allows them to connect with you and your brand and it's a chance to answer some of your audience's common questions in real-time! Facebook reports that there are ten times as many comments on live videos as there are on recorded videos.

Not to mention, you can repurpose them. After the live broadcast, the video will be automatically posted to your Facebook Page to watch on demand and advertise like a normal video post. So, don't stop using Facebook Live because Watch is here. And if you don't already have it in your marketing pipeline, add it now.

Where do I begin?

Recorded videos on the news feed have evolved over the years and best practices are readily available. But with these newer Facebook video features – especially Facebook Watch – almost everyone is alongside you in the learning curve. Start by checking out what's out there. What videos are working? What are your competitors doing?

Again, since there are roughly a billion users on Facebook, all who now have access to Watch and Live, you'd have to be crazy not to at least acknowledge these tools when forming your social media and video marketing strategies.

Video blogs are a great way to drive new website visitors, boost engagement, and increase your...

Not all content is created equal. Marketing automation, social media and the internet as a whole...

The Modern Marketing Playbook: New Tactics to Try in 2019

With the start of a new year, comes the exciting opportunity to make a refreshing new start. The...